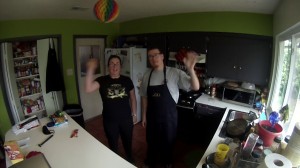 This week we didn’t have much time at all to do our cooking.  Since we knew that ahead of time, we opted to go for some dishes we knew would work well – hence all the repeats.  But they’re delicious repeats, we promise!

1. Beef veggie and cheese burritos (yes, again from last week) – we could eat these every week.  Actually, we’re going to just tweak them a little bit and probably eat them NEXT week again.  That’s how much we like them. (Ignore the calorie count, for some reason spark doubled it – it’s ~390…) 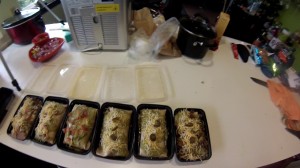 2. Pasta Fa-Jolie Soup (it’s been renamed for supreme cuteness) because it was good and we wanted it as a soup instead of a pasta casserole dish. (less noodles again next time, but this time we got a *little* broth with 8 oz of noodles, we’ll go 4 next time)

3. Chicken, corn/quinoa noodles, broccoli and peas (and Leah’s had spinach), with artichoke pesto sauce.  This is always a good meal.  Pasta dishes are AWESOME after running days.  It was just as good with the pesto as it was with the light alfredo. 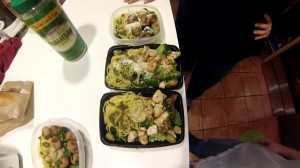 Obviously these all get the endorsement of A+, would make again!

By cooking only 3 meals last Saturday instead of four, we were able to squeeze it in between training and hosting a party, instead of taking up a lot of Sunday.  We were able to make a good amount of food for the week that only needed to be supplemented by a few fish dishes and a few meals out.  And since we had been missing our fish, this worked out even better than expected.

Next week we’ll try a few new tricks, so tune in next week!

Question of the week: What healthy meal would you (or do you) eat all the time?