I think we do this race every year. It is just such a fun race. Start up near work, end down town. Get a ride back to the start.

Lets discuss this years race. Things that went right and things that did not.

We had planned on cycling to the start of the race, it was only about 4 miles from the house, but when we woke up it was very windy with gusts 25mph+. That didn’t seem like something safe to ride in, in the dark. So we decided to drive. I was looking forward to a nice spin warm up but that blew away with the wind. 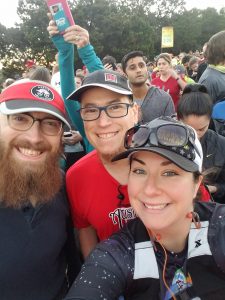 We parked in the normal parking lot we always try to park at for this race. The google buildings parking garage. It was simple to get in and park. Its only about 1 block from the start of the race, so we ended up having plenty of time to drop off the gear check bag and get in line for the bathrooms.

About 10 minutes before the race start we spotted Matt standing by the 2:15 pacer sign, right where we all agreed to meet up. A few minutes after that Brian called and he started working his way into the crowd to us. It was so nice and warm in the middle of the crowd. I was freezing and the wind was making it worse. But anyways the National Anthem played then the horn sounded and we were off. In the 2 minutes it took to get from the 2:15 pacer to the start line Brian caught up with us, and we all started to talk about our expectations. 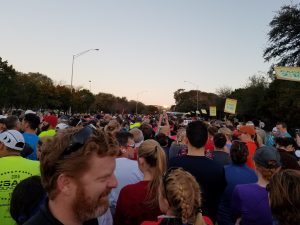 At about half a mile in Brian took off, he was going to be shooting for a 2 hour flat, and that was way faster than I was willing to go for this race. So we said goodby and didn’t see him again until the end. Between mile 1 and 2 Leah stopped at the water stop and her hat got blown off in the wind. I didn’t know because I had just kept running. But she caught back up a few minutes later. During that time Matt had decided that he was going for his 2 hours 8 min pace and also picked up speed. I didn’t see him again either until the end of the race.

By mile 4 I really needed to use the bathroom again and thankfully the Austin Beer Works parking lot had 5 port-o-potties set up. The line was only a few people long so I ducked out and Leah ran on. Just a few minutes later I was back and running hard to catch up to Leah. Somewhere in the high to mid 8s.

We caught up at the top of shoal creek and kept a nice easy pace for the next few water stops. Once we hit the half way point water stop and the elevation started dropping, I asked Leah if she was OK picking up some speed. I knew we wouldn’t pr without a miracle, but I also wanted to put up a better than easy effort at the end.

Run run run, Nice easy down hill, Leah had some of her non verbal language for me, I felt some mental nails being shot at me at some of the little up hills in the last 4 miles, but I tried to make them hit the sore spots of my back 🙂

As we rounded the last bend into the end of the race we both took it a little bit slower, since that hill is just the worst to put at the last quarter mile. There was no extra juice to sprint the end. but we finished with a solid run, and I felt good about the race. 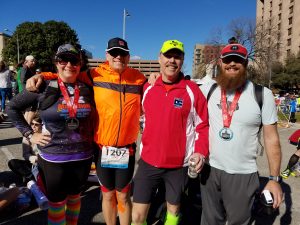 We met up with friends at the beer tent and had a recovery beer or two, then walked up to the capital and got a ride back home. Overall it was a blast just like it always is.

I am sure I will sign up for it again next year. I hope to see some of you all there.

One thought on “Another 3M half marathon.”