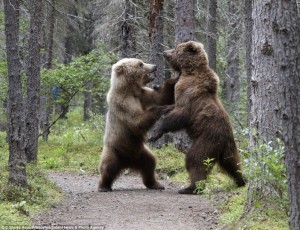 So back on Halloween, I got into a fight with a bear. Took a few punches and an “arrow to the knee“, but I got up with the help of some good friends and went home to go to bed.

I could barely stand the next day and just felt terrible, had a cut on my face and some broken glasses. I hobbled around icing and taking mild pain killers and was worried I really hurt myself. I gave it a day to be in bed and worry.

I took Sunday and Monday off and tried to run on Tuesday, I still couldn’t walk very well and was in quite a bit of pain, I decided to trainer ride instead. Wednesday I got on the trainer, went for a walk, then ran 3 miles that night and it hurt, but not quite as bad. Pain kept me out of exercise for Thursday and Friday.  I ended up cycling again on Saturday for about 35 miles and running 10, and when I hit 10 I was DONE. Just too much pain. Sunday I could barely walk again, I went into the friendly chiropractor that next Wednesday and got checked out. She was worried and had me stop everything and go get an MRI. I was able to get in Friday evening for the MRI, and went to her office that next Monday to get the results: 1 Fracture in my femoral plateau, and 2 fractures in my Tibial plateau. She wanted me on crutches as soon as possible and no more racing for the season. No running and no biking, but swimming would be OK as long as I didn’t do flip turns.

Instead of continuing to train for the Space Coast marathon that was coming up in about 5 weeks, it was crutch around and swim. I have to say once I “knew” it was fractured, rather than me just thinking I was over reacting to a little pain, that is when it really started to hurt 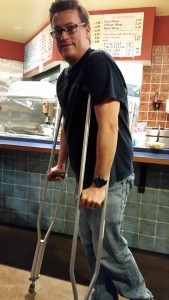 . Once my brain knew it was OK to have a pain, it piled it on. Being on the crutches sucked, at least  I was able to stay off the leg mostly.

Even though I was not able to race the marathon this 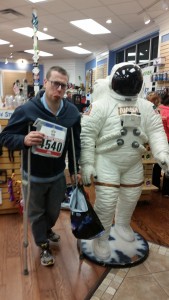 year, I talked to the race director and was able to last minute volunteer in a position where I could sit down most of the time. It was nice to get to be part of the excitement without just being depressed that I wasn’t running. 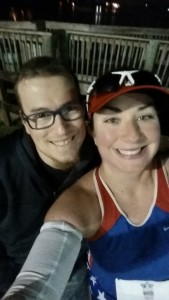 I had made some special arrangements with the DR. that I would not use the crutches on the 2 days where we went diving or snorkeling on our vacation, and I was good, I used my crutches everywhere on the ship, just not when we went to the little boat for scuba diving or snorkeling. I made sure to not put on my tanks and gear until it was exactly time to get in the water so I wouldn’t put too much pressure on my knee. YAY me, but damn, crutches on an active vacation stink. I normally am all over the cruise ship, this time I stayed put once I got somewhere. 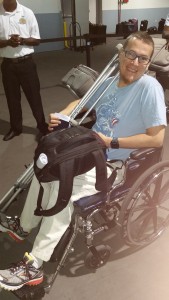 Getting back home after vacation left me with more time to swim and crutch around. I did take some time the day after we got back to go put up Christmas lights! Christmas was great this year, since I was off the crutches on the 20th. 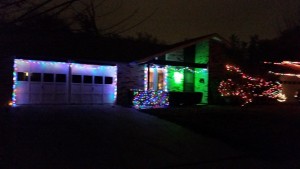 On the 21st I was able to start back on the bike trainer with low intensity and no resistance. For 30 minutes, then each day I could add 10 minutes if I felt OK about it. Let’s just say that 30 minutes on the 21st and I wasn’t able to do 40 on the 22nd. My leg and knee were still just too sore. I took the 23rd off and for Christmas eve I had a 40 minute ride. Since then I have been able to ride a bit more and bring my total riding per session time up to 100 minutes, but my leg is still weak and recovery is slower than I want it to be.

Since the injury I have had 20 swims and 12 rides on my trainer + a few weights here and there for upper body work. My swimming has improved quite a bit, at least nothing feels as hard as it used to, and I am loving swimming in a heated outdoor pool in the winter. Seeing the steam rise off the water looks really cool. A 45 minute 2k swim now feels “normal” and my shorter swims are now 1k in about 22 minutes. My best 100m in this new pool has been 1.42/100 and that’s damn good. My average is now about 2.10/100 and that’s as good as last year’s fast time.

Its been 60 days since I ran that 10 miles on a fractured leg, and 67 days total since the bear fight. I feel out of shape and gimpy, but am happy to know that in only 24 more days and I will be able to get out and run again. Even if it is only a mile and adding a little at a time.

There is my little recap of my injury and how I have been recovering.

Please all, if you think you hurt yourself stop and go get checked out. Don’t be dumb like I was and run on it multiple times and possibly make it worse.

I might be sad that I missed out on Space Coast and that I will miss out on a few other races, but I have decided that since I will be able to keep running and its not a permanent injury I will be happy for the future and take it as slow as I need to now to let my body heal.

BTW I didn’t really fight a bear, that is just what the doctor said to say.