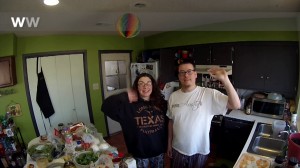 OK, Joel is getting better at this video thing, and is working on making the clips shorter. We realize you probably don’t want to watch a 20 minute video of us being dorky in the kitchen. So week 4 video will show off the food more and less of us just talking! This week 3 video on the other hand isn’t the best. We were grumpy by the end of it and we felt like we had cooked forever! 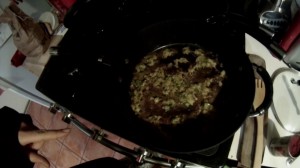 Overall, we were pretty happy with the food this week but might not make everything again.  Details below.

Joel: From my perspective the Indian was fantastic but maybe not worth the effort to make all the sauces from scratch. It is easy and just about as healthy to me to go buy a jar of pre made sauce.  It was fun to learn how to make them though.

Leah: I disagree.  We have had some pretty terrible jarred indian sauces and this was one of the best non-restaurant versions I’ve had of either dish (to get that good we need practice :D).  I do admit though – this took SO much longer than any other dish.  Also, I probably don’t want Indian food this frequently, so if we do this again, I would just make the chicken, and throw veggies in like we did (and maybe some paneer), and call it a day.

For the record: we used these recipes pretty closely minus using half and half instead of heavy cream to lighten it up a bit, and adding cauliflower and green beans to the chicken dish.  Would do both again. 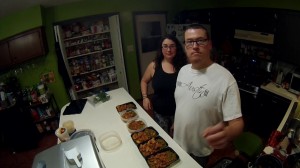 Tuna Sandwiches and Kale and Potato Chips (no recipe for the tuna, check the video for the awesome dueling tuna segment…):

Joel: The tuna worked well, but I ended up with some left over, I didn’t need 2 cans of my own, I think I would have done great with just 1 can and 2 sandwiches.  Also, we ran out of bread mid week, so we went out one day we were supposed to have tuna.

Leah: While I enjoyed having it done for me, I really don’t mind and have plenty of time over lunch to put together a tuna sandwich.  It got a little skunky by Friday but was edible.  The kale and potato chips were AMAZING the day of and then worthless after being stored in a bag.  I would totally do both again, but only for day-of consumption (but let me tell you people – if you want to consume a whole head of kale in one sitting, do this…trust me…)  It was super easy, but took a lot of stove attention for about 10 mins per batch.

Beef Stew (made it sans Spicy this week and with extra beef to extend from 4 to 6 servings):

Joel: The Beef stew was amazing as usual, I can eat that every week.

Leah: I dunno about every week, but it’s always a good meal!  Tip: do NOT skip the steps preparing the beef.  It comes out so much better seared with just a dusting of flour.  I’m all for the easy route but don’t do it here!!! 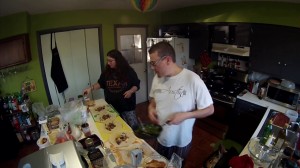 Joel: The burritos were good that we made them again for week 4.

Leah:  I wholeheartedly concur.  I looked forward to burrito days all week and I was sad we only had two each.  I could eat these every week.

That’s it!  Next week, we’re doing a little less because DANG that was a long day in the kitchen!  Whew!

Question of the day: What is your favorite “easy” meal that we could batch cook and try out?  Let us know!

Leah here! Welcome to the Adventures in Triathlon Cooking Show – Week 2 (let’s call Week 1 lost to the ages).  We don’t stab… too hard! 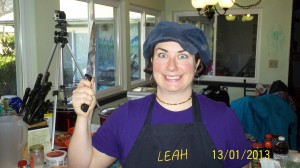 This week we made FOUR meals, as we had a little more time to fill (Saturday – Sunday), though since we got a late start (the batch cooking was on Sunday instead of Saturday), we will just have a few extra for next week!  No big d, it’s nice to have some variety, and these all ended up to be GREAT, though one dish went an unintentional way…  Check out the video below for highlights of batch cooking this week!

Here are links to the recipes.  I won’t belabor the point and rewrite them here, but here’s my take on each since we’ve had a chance to taste them all a few times eating this week: 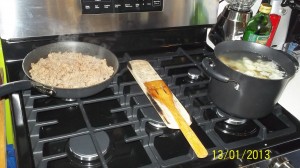 This was the oops.  I had this lovely broth, bean, veggie, and italian spice thing going and was so looking forward to it.  However, like a dummy, I added DOUBLE the amount of pasta (it called for 8oz, I usually buy 8oz boxes of pasta, but got new pasta that apparently was 16oz).  There may have been some champagne involved.  It ended up still being GOOD with some extra parmesan or cheddar cheese as a pasta dish, but I wouldn’t make it that way again without double or triple the tomato sauce.  The recipe is for the way it SHOULD have been.

This was EPIC the first day.  It was the favorite thing we made.  Sadly it hasn’t held up as well reheated.  I may save this one for a non-batch cook day in the future.  It’s adequate, but nothing is even remotely as good as it was the day of cooking.  It also has sauces with MSG (didn’t realize that when planning it) – so while everything else about it is super squeaky clean eating, that alone probably should make it a once in a while food.  Also, the veggie stir fry – I used a seasoning packet this time (I have a bunch that I always forget about), but the calorie count should be about the same.  For the noodles, I literally tossed some brown rice noodles (about 1/2 cup per serving) in a dash of soy and sesame oil.  Also amazing Sunday, but not as good reheated.

We’ve been making this for ever, but this was the first time we put cauli-taters on it.  Cauli-taters are magical and worked just perfectly.  Not entirely sure I’ll eat straight mashed potatoes ever again, especially in batch cooking – they are definitely better the next day.  Next time, I will also package up some salads to go with it (in separate containers) since I seem to be REALLY LAZY about making salads this week because in my head the cooking was all done.

This was the last thing we cooked, and again, there may have been some champagne involved.  We layered in all the ingredients and we almost put it in the oven and realized that we had forgotten the chicken that we lovingly put in the crockpot and then shredded up.  So we put it on top of the pie and didn’t have much sauce to coat it in.  It got all crispy.  It wasn’t a deal breaker, but I’d definitely layer it into the bottom of the pie with the beans next time.  Also, next time I’ll figure out a way to mark which side has the spinach, since Joel got some and complained about it.  Also, also?  Perhaps maybe 1.5 cans of enchilada sauce would be better, it could use a little more goosh. 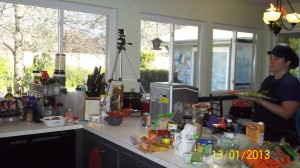 All in all, everything is definitely edible, and I’d make them all again (though the mongolian chicken would probably be a one-off, not for batch).  We’ll be cooking and tasting more healthy foods this weekend so stay tuned for Episode 3 next week!