Last year I had a huge goal for 2012 – to do 24 races in 12 months. We were able to check that off the list, but it didn’t come without sacrifices elsewhere. I didn’t go hang out with friends nearly as much as I should have. I didn’t go to any Game Dev Beer Nights until after race season. I didn’t write as much as I wanted and I for sure didn’t read nearly as much as the year before (I read over 100 books in 2011, only about 80 in 2012).  My motivation was to live my life in a way where I could race as often as was required to meet my goal. 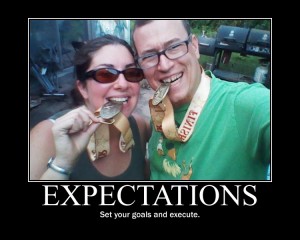 2012’s 24 races in 12 months was amazing but it was draining and I accomplished what I wanted to out of it.

1. I was able to accomplish all my work and still get to every race healthy, fit, and ready to fight.

2. I was able to prepare properly the day of a race.  We got the day before and the day of racing prep to a science (this will be a post in the future).

3. I was able to sleep before a race and not wake up every few minutes during the night.  Before this I would be too nervous and sleep fitfully.  Now I am way more calm about the whole process (most times).

This year my expectations are to:

1. Train properly for each race and distance.  We will be using racing as a compliment to our A races, and not something to schedule training around.

2. Keep up with my nutritional needs for each stage of training.  Eating as healthy as possible while staying sane, and fueling each workout properly.

3. Get better quality sleep the weeks leading to a race.  Dependent on work hours as always, but making sleep a priority.

My motivation: It is going to be TRI season in a blink of the eye. If I can commit to better habits of eating and sleeping now, they should be able to carry over into the times when I will need them the most.

Leah (that’s me) and Joel (my lovely husband/partner in crime) here. We’re age group triathletes in Austin TX that take this stuff pretty seriously (except when we don’t).  We’ve completed quite a few sprint triathlons, a few Olympics, and one 70.3 (half ironman) triathlon over the last few years (mostly last year :D) and have the ultimate goal of completing an Ironman before 40, and maybe even getting to Kona someday.  Y’know, with the 70-74 age group…

We both started dabbling in running and a little biking as a way to stay fit after losing a bunch of weight and I found running races and got hooked.  First a 5k, then a 10k, then a half marathon… I had the bug hard.  I really enjoyed pushing through a training program and seeking to improve my times.  Joel wasn’t that into running, but he thought triathlon sounded cool (even though he really hated swimming and running) so we started working on that and I completed my first triathlon in Aug 2010, and Joel, who was unfortunately down with a super nasty lung funk that summer, completed his first April 2011.  We were hooked instantly and are triathletes 4 lyfe now.

While we can swim, bike, and run further and faster than the average bear, we’re both seeking to shed a few lbs to reach our optimal race weight, so we will definitely cover our eating strategies and weight loss progress here as well.  If transition is the fourth sport in triathlon, nutrition (on and off the course) is most definitely the fifth.

We’ve got our Go Pro cameras, our training spreadsheets, our maps, and our plans laid out for a fantastic 2013 season, and we’re ready to chase some PRs.  As this is not our first BBQ (errr… season of racing), we’ll offer tips and tricks along the way on just about everything from bike maintenance to batch cooking to training schedules.  Joel will be the video man (so please give him props, as those 2 minute videos take a commitment of a few hours, minimum), and I will be the main wordsmith on the mic… errr… blog (though he will certainly chime in at times).

So, welcome to our Adventures in Triathlon.  We hope you’ll join us for the journey.