Last week was difficult for me in some areas and good in others. I was very happy to have the 40+ hours away from technology and the internet. The work of getting the blogs set back up and all the tinkering drove me to have a few drinks. Hard to do the diet thing when some calories go to the booze. But I was a responsible person and kept it to a minimum. Until I went camping at least, then I allowed myself a few extra beers. But lets just ignore that and end this opening by saying I am still losing weight, and it still hasn’t gotten much easier.

Now that the “How did I do” section is out of the way, lets talk about the fun adventures we had out at Lake Granger. To start it out, Wednesday night I started to lay everything out that we would need to pack, since the goal was to leave right from work (That didn’t happen.) I would estimate it takes me about 5 hours over 2 days to get everything packed and ready to go. But this wasn’t just a normal camping trip, this was an adventure! So of course I had

I wish I would have gotten a picture of the Xterra all loaded up. You couldn’t see out the side windows, and I only had a small section I could see out the back window. But that is better than some trips where we also take the easy up. Just being able to see if a car was behind was a great improvement.

Anyway we took a quarter day off of work on Friday and left at 3pm. Got home to switch over to the Xterra, got ice and headed out. I forgot the bag that had booze in it in the trunk of the other car, and when I realized that we were already over half way there, so we stopped and got more. That worked out well and the lady that worked the counter there ran out after us and asked Quix about her sandals.. Then just kind of wanted to chat. I think she was lonely, but we had a camp ground to get and I was getting a bit antsy. I tend to get nervous or worried when I want to get somewhere by a certain time and I haven’t made the trip before.

With Quix’s help navigating and being DJ, we got to the camp site a little over an hour after we left the house. It was beautiful! We have only been camping here in central Texas about 8 times now, but somehow we have the super power to unload the Xterra and have everything set up and done in about 15 to 20 minutes. I take 4 – 5 hours to pack it all back up and put it back in. It just boggles my mind. 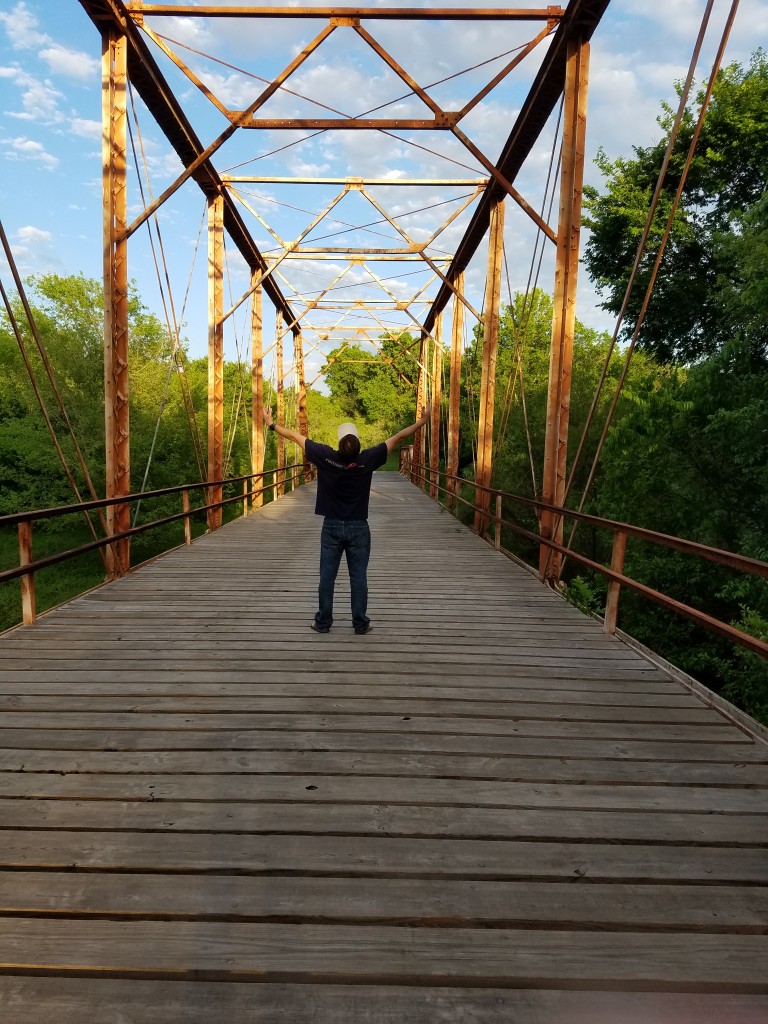 Once it was all set up we went for a wander to get to know our surroundings. Found a neat old haunted bridge, a bathroom that was super scary, and some amazing scenery. We didn’t quite find our way to the water yet, but we do eventually. 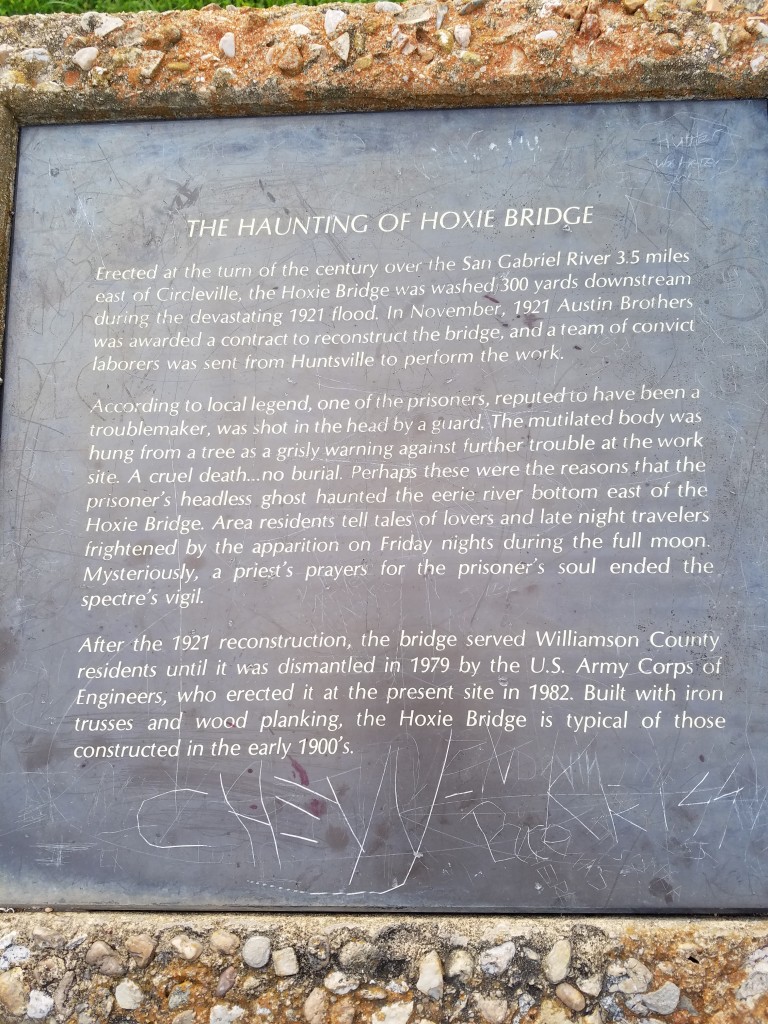 Hot dogs cooked over the fire is the way to go first night of any camping I think. After dinner I pulled out the new drum and played until quiet hours at 10. My fingers are still a little swollen from playing so much. I forgot when you start playing a new instrument, it takes a while to build up the needed callouses. I had a blast, and Quix was signing songs to my drumming. Needless to say it was a fantastic first day.

About 8:30 am on day 2 I woke up and was just “up”. It was a bit cold and cloudy and it really looked like it was going to rain, so I got everything under the shelter then got to cooking. Now I don’t think I made the best breakfast tacos in the world here, but I think they might have placed in the top 100 at least. I started with garlic and black pepper bacon in the dutch oven, once cooked I drained most of the fat and added a can of re-fried black beans. While that was cooking I put the tortillas on the grill and let them get a little warm and smokey. Add it all together with some cheese at the end for a great easy camp breakfast. While I was cooking the bacon I felt many mind bullets from the people walking by our camp site and going to the bathroom.

Quix didn’t want to get out of bed quite as early as I did, so I got the bikes out and got them all ready to go. Then went on a few “test” rides around the campground.

Then we sat around and read for a while, waiting for the rain and wind to stop. At least once we started our bike ride the rain had stopped, and the first half of the ride was with a tail wind. Between that and the new areo helmet, I was blown away by the speed I was going vs the watts I was putting out. Easily hitting 18s when only putting out 100 watts on the bike is not normal for me. We had a great ride out and across the dam. My cell got reception there and I saw a text from dad saying he was going to come visit us at the camp site. I found out later he got there just about the time we left on the bike. But it all worked out OK. We took a few pictures of bikes and wild flowers and under a <–> sign.

Then headed on back. Going across the dam this time the rain was really starting to come down and we had a decent side wind. But we still managed to do about 16 – 17 mph without much effort. Once we turned back onto the main road though we were going against the wind and the speeds plummeted. Also there were a few jerk cars and trucks, so I wasn’t staying in areo position as much. 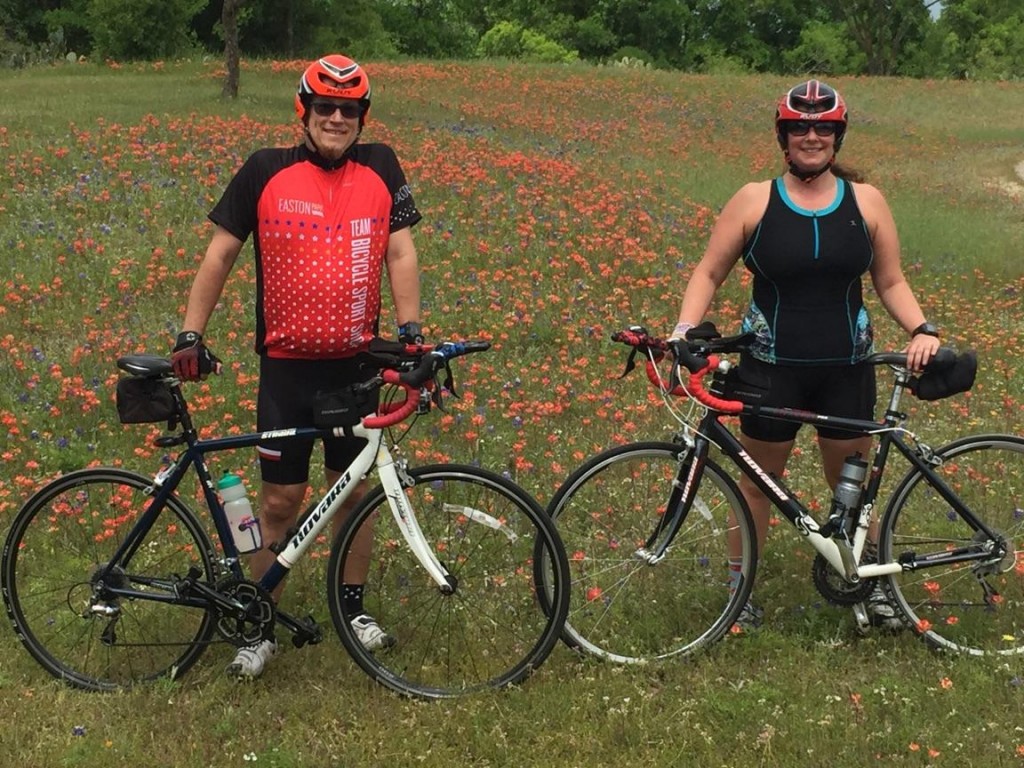 Once back at camp we scarfed down our sandwiches quickly, then changed and headed out to go fishing with dad. It was a little trek through the woods and down some precariously slippery sections. I was glad I was in my sandals, but was wishing I had big boots on for traction. We found a spot that looked good and Leah got her line out in the water first. Within about 6 minutes she had a bite and tried to reel in the fish, but it got away when it swam around a log. That was the closest to catching anything all day.

We kept getting out lines stuck on the same log out there, so I just waded into the water and moved it out of the way. After about an hour or so at that spot we moved on to find another one. Some little kids that were running through the woods pointed us to a nice area with a broken tree that made a great place to put your poles and a nice little beach. My first cast out got a bite at this spot, but I didn’t hook it. We saw plenty of fish jumping and eating bugs at this location, but I think they were on a diet of no worms.

About 4 or so we gave up on fishing and headed back to camp. I was cold and still wet from getting in the water and the rain, so after a quick change, I built a fire and started prepping dinner. Baked potatoes and chicken with a salad on the side. Cooking the chicken in the dutch oven for about 20 minutes then finishing it up on the grill over the fire made for a great dinner. The potatoes as always took an extra 2 hours.

We thought it would be fun to start a new book series at the same time, and we had started them in the morning, but now we were in reading mode. Until about midnight I was reading. Quix finished the first book a few hours ahead of me, but then again she is a much faster reader. If your interested so far this is a fun series. Post Human.

Sunday morning we really wanted to go kayaking, but it was a little bit cold and windy, so we lounged in the tent for a hour or so after waking up. I was going to go down to the water and try my hand at fishing again, but the biting fly and mosquitoes were out in force. Before even getting to the path I was being eaten alive and decided to not do that. So instead I made breakfast again, just like the day before and watched as all the other camp sites started packing up to go home. I slowly started getting things packed up, we were all packed up and heading home by about 1:45.

The ride home was un-eventful and that’s always a good thing. Next time we go camping at Lake Granger I am for sure going to get a spot a little further from the bathroom. It wasn’t bad, but you could hear every time someone flushed, and it took a little bit of the serenity away.

This next week is a little more mellow, but still packed in a different way.

Have a good week!