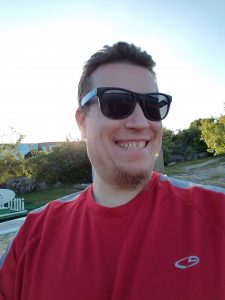 Its been raining off and on for about 2 weeks, and more is on the way. I love the rain, but it was starting to get in the way of getting good outdoor time in. At least this last weekend it stayed nicer. But lets do a quick recap of activities. 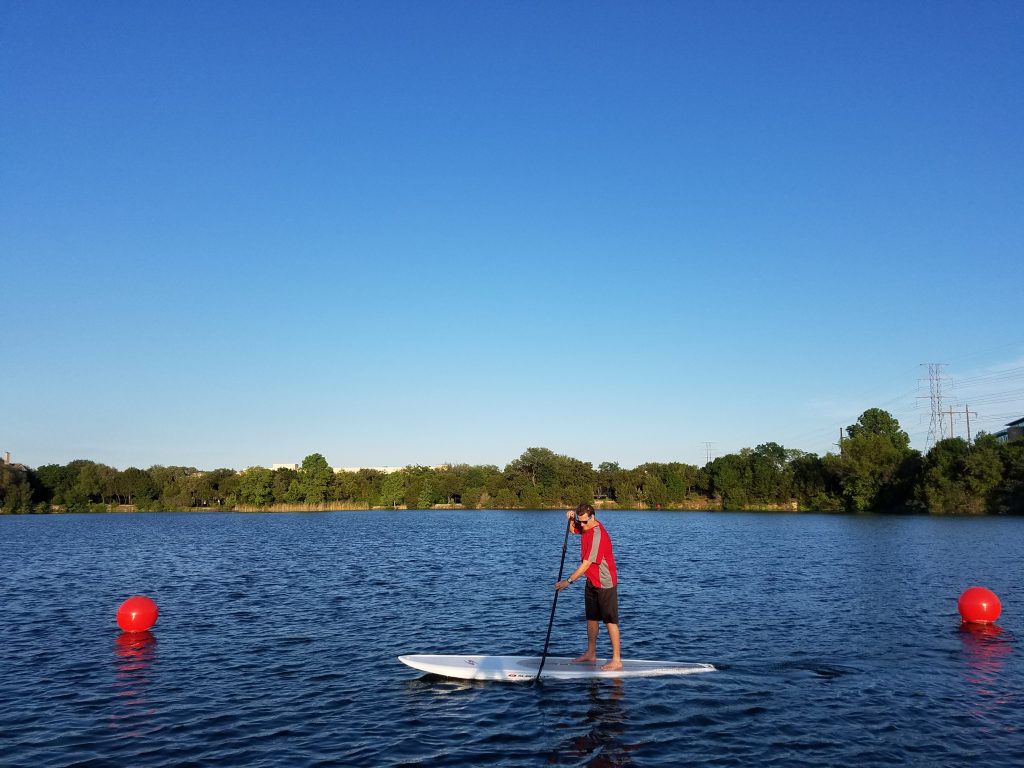 Now for the longer version.

Our little brick on the 16th out at Lake PF was a great dipping of the toe back into triathlon. Off season isn’t stopping, and we are still focused on #ProjectRaceWeight , but we also were missing going out to the lake and Quix wants more bike time to work on skills. We got out to lake PF and Team Red White and Blue are there putting on their own Triathlon. It was going to start at 11, and we got there about 10:30. It was fun to see a really small tri going on. Probably no more than 50 contestants. I hope I can find a nice small race like that some time in the next few years.

We took off on our bike ride and it was a little windy and a little wet, but not so much that we were going to stop. We did a nice little 5 miles out and back for a total of 10 miles.

We got back and started our run just in time to see the little triathlon start. They were running a little behind, but that was great since it let us get off the course before they started. We ran half a mile out, then stopped to take some pictures, then half a mile back. Overall just a nice run with a little rain and some wind. 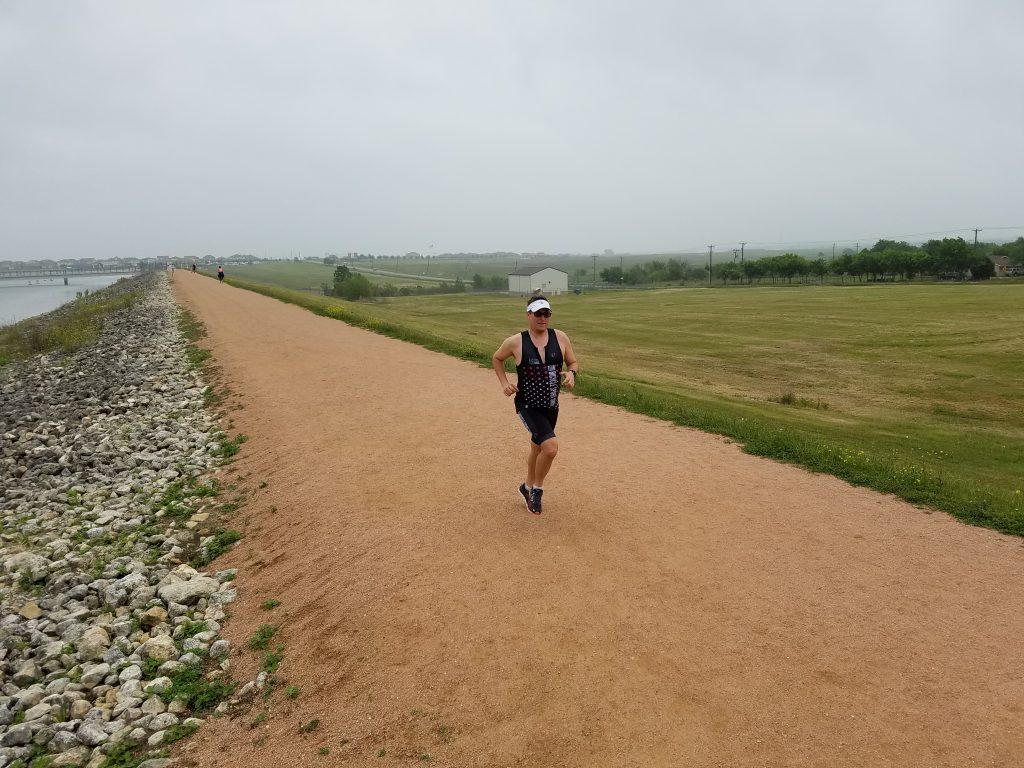 Later that day once Quix went to a baby shower I went to the pond we found a few weeks ago that’s close to the house. It decided to start raining just about the time I cast my line out. It rained almost non stop for the hour I was there. By the time I left all I wanted to do was get warm. 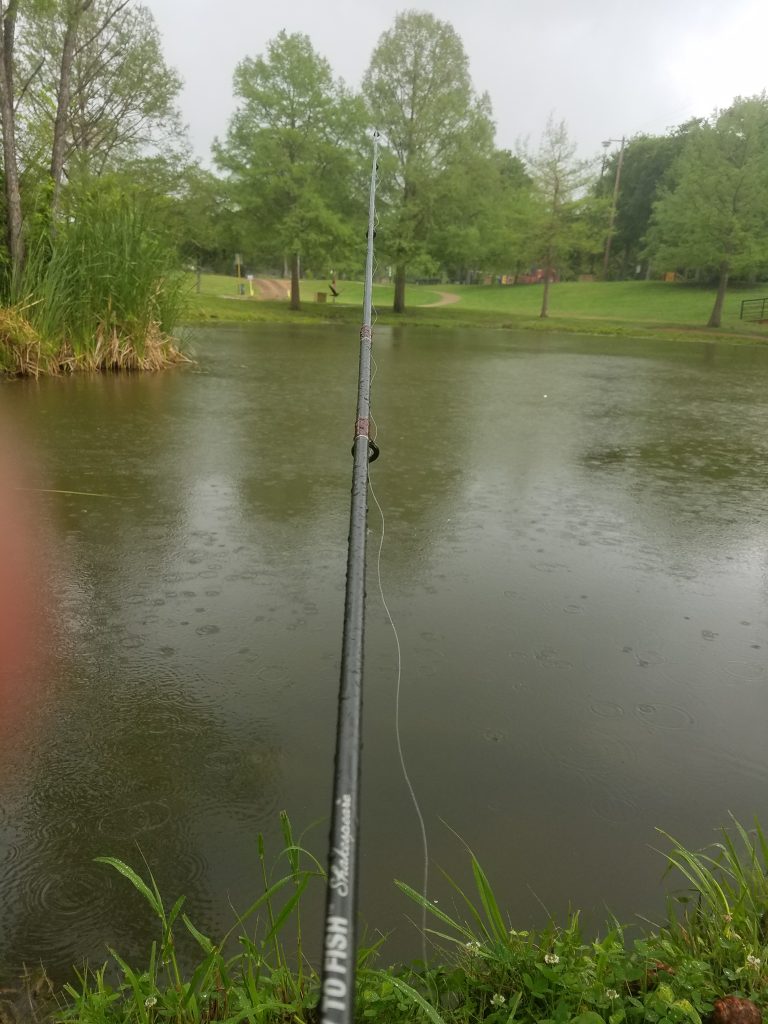 We had a great bike ride that next Thursday. We were practicing starting and stopping skills at all the stop signs and lights. I might have picked a route where i knew we would get more stops for practice. I only accidentally left Quix at a crossing once. 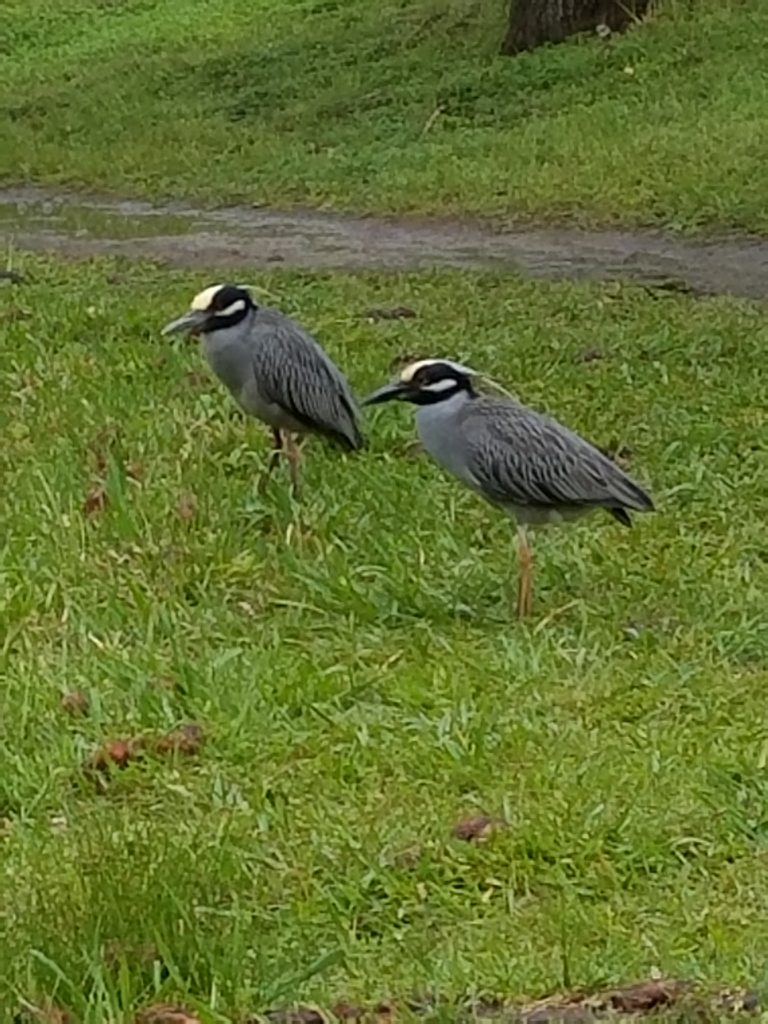 Friday after work we met up with the BSS Tri team people, well to be honest there was Quix and I and 2 other people I didn’t know. Matt had said he was going to come but after a few minutes of waiting the other people got anxious to get going and took off. We then waited a little longer then jumped in after they got about a 1/3rd around the lake. Matt did end up showing up and I felt bad that he was swimming on his own. But that guy can swim like a fish now. I wish I was dedicated enough to go take masters classes like him, but getting up that early I think would kill me. 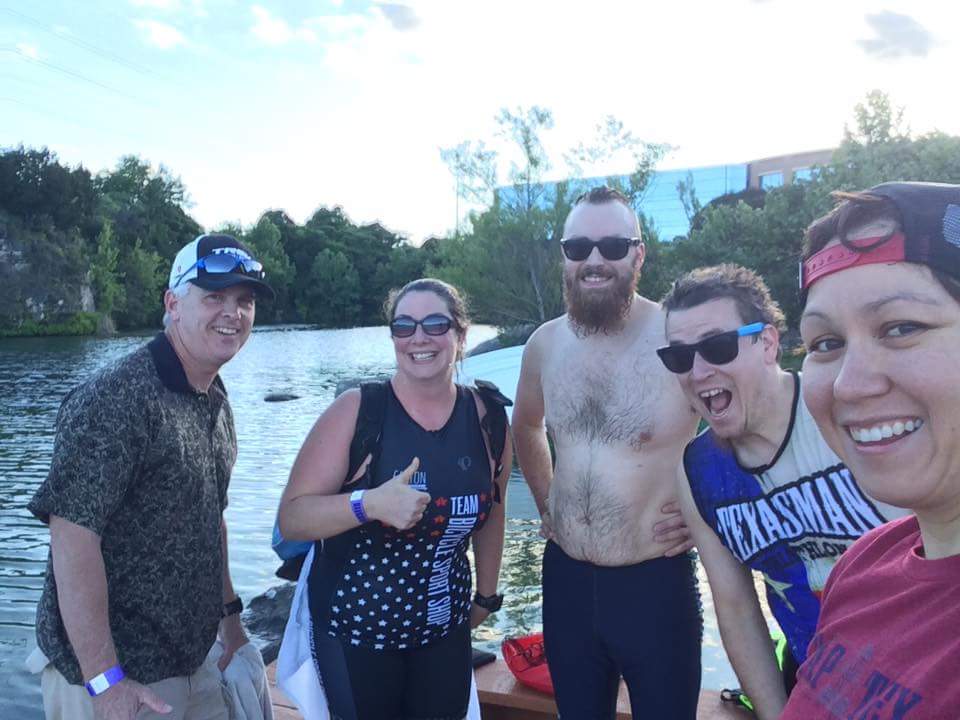 On to Saturday we went out to lake PF again, because LAKE! Instead of doing a normal brick, we did a reverse brick, run first then bike. I had a different easy pace than Quix had, so we ended up running opposite directions around the lake. Once we passed each other at the half way point I decided to pick up the pace past easy. I guess my new Rocket Science singlet gave me some rocket power. 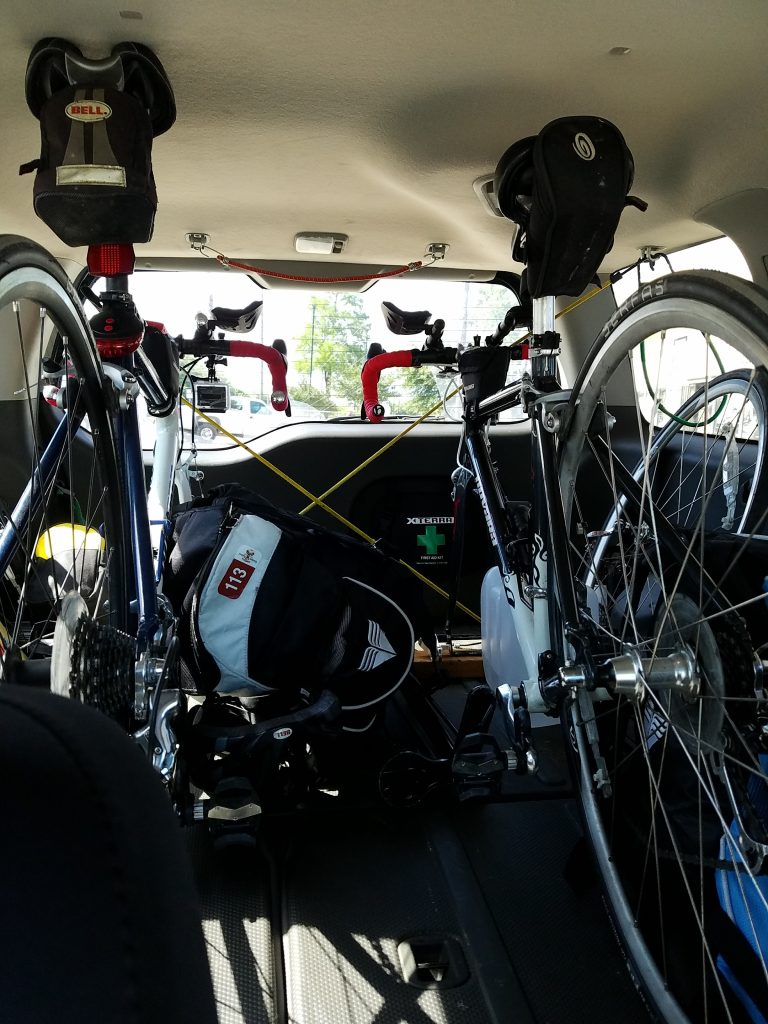 Then on the bike ride I had a GoPro camera on each bike mounted on the areo bars. That way we could both get shots of each other for the blog headers. I think we found some good ones. 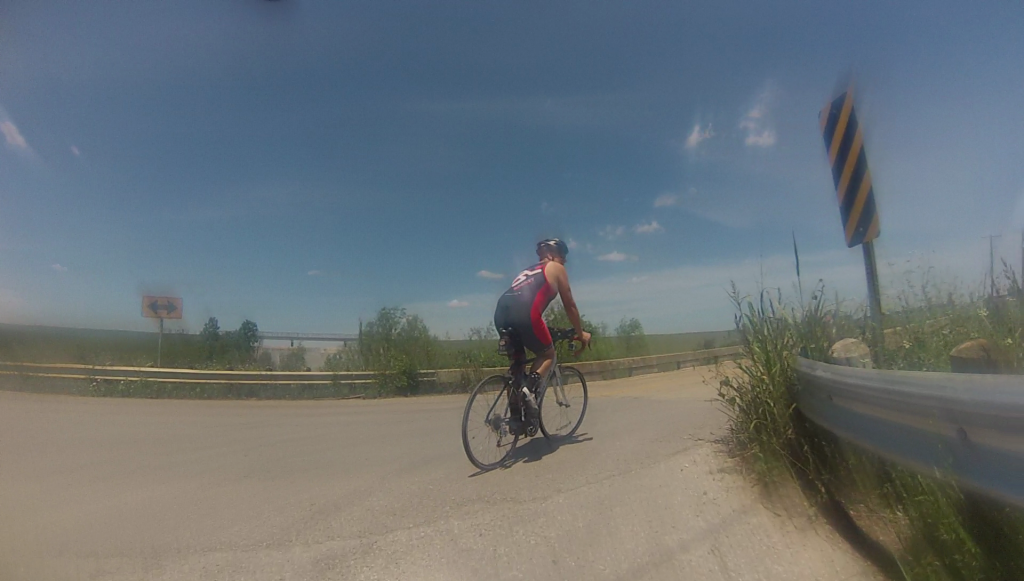 After the lake we had lunch at Panera, then best buy to get Quix a game, then to Babys-R-Us to pick up some diapers for me to take to a daddy diaper party. ( Like a baby shower for the dad I guess.)

Went to the Daddy Diaper Party, got to talk to friends, drink some Miller light out of a keg in a trash can ( always a fun) Then went home and we watched the new Star wars movie. 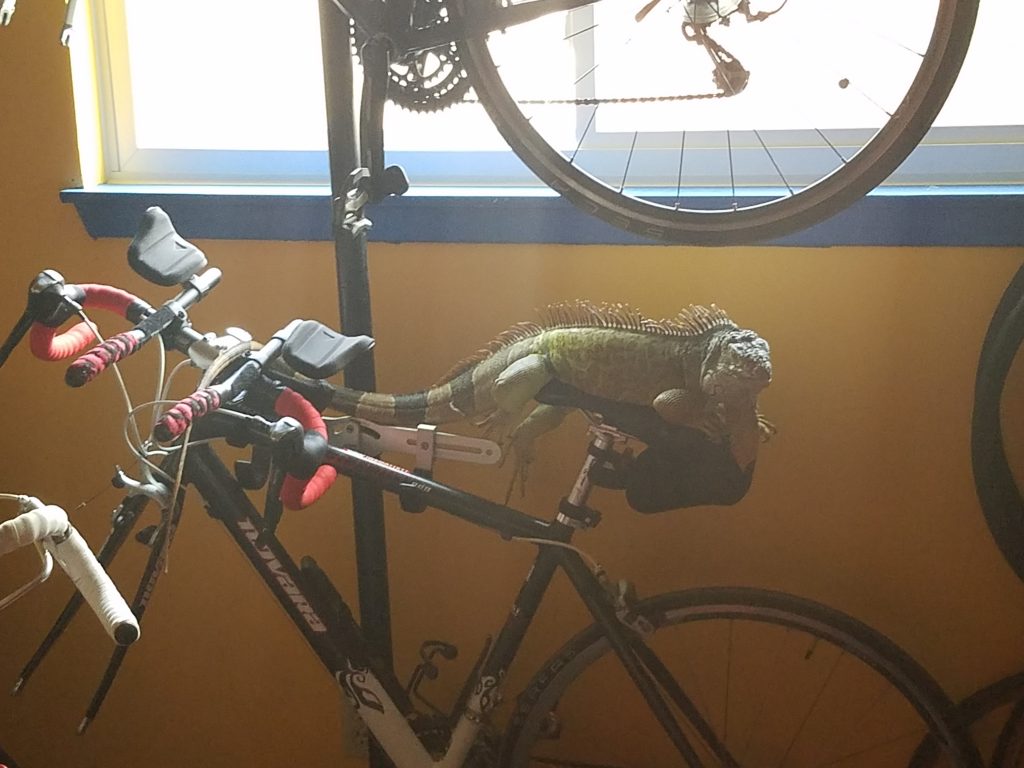 Sunday was up about noon, putz around and do some cleaning. Then we took a long walk, went fishing and then another long walk. As strange as it seems I think I am honestly more active right now in the number of walks I get than when I was training hard. Just because when I wasn’t training I was trying not to move. Now I try to go the long way every time I go some where just to get more walking in. (So I have more calories to deal with.)

So with all the rain, I wanted to make a pro and con list.

2 years ago we were in quite a drought. The lake was so low that people that used to have water front property might have over a quarter of a mile to get to the water then. Thankfully in the last 2 years all this rain has raised the lake level and its so full they are going to let some down stream. That is fantastic news for the races that will happen down town later this year. If they can let more water into town lake and out of it, maybe it wont smell and taste so bad. Maybe it will even wash some of the growth down river.

Well I guess that is it for the last 2 weeks. Depending on how eventful this week is there might be another one. I would like to start looking at tri bikes soon. I might make a post about my feelings about that.